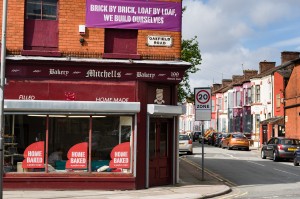 A major project with artist Jeanne van Heeswijk for Liverpool Biennial that initiated a new model of community-owned and people-centred regeneration in Anfield. Brick by brick and loaf by loaf, we worked to reinstate the former Mitchell’s bakehouse as a community co-operative bakery, and establish Homebaked Community Land Trust to provide affordable housing and workspace by refurbishing long-empty homes in the area.

A programme of talks and creative activities enabled a new network of people to “take matters into their own hands” and manifest a new future for the neighbourhood.   Later, the Anfield Home Tour, an alternative “heritage” tour, devised by Britt Jurgensen, Deborah Morgan and Graham Hicks, told the story of local people’s experience of regeneration in their own words and was the resounding success of Liverpool Biennial 2012.