[one_half]
Urbanism was a festival of creative ideas and interventions that proposed a new life for a stretch of the Leeds-Liverpool canal. Organised by Liverpool Biennial, it brought together artists, architects, thinkers, community groups and local agencies in a programme that included an urban kitchen garden and pop up cafe, an observatory tower, a conference, a boat parade, beekeeping and zorbing. 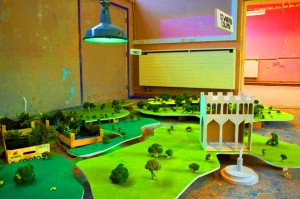 [/one_half]
[one_half_last]
Maria was part of the curatorial and production team, commissioning artists to make boats – a water taxi by Lambert Kamps, an amphibious vehicle refashioned from a skip and a floating mint teahouse by Ben Parry, a fantastical painterly pirate ship by David Bade. Together with a lantern boat by Public Works, and narrow boats from around the county, the boats formed a flotilla, the parade followed by hundreds of local people in a collective celebration of the canal.